skip to main | skip to sidebar

wrapping up your pride 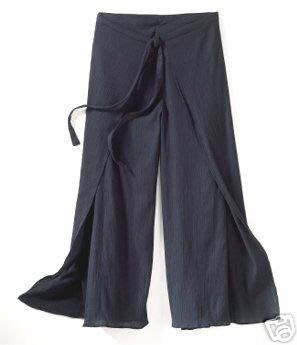 so there i was last weekend marching in the nyc heritage of pride parade. and was i thinking about those before us who suffered (and died) for the sake of the right to love the person of their choosing without persecution in our crazy society? was i thinking about those who suffer and fight today for the right to marry the person of their choosing? equal rights/rites for all mankind? well, maybe. but mostly i was thinking about the AWESOME yellow pants on the gentleman in the ebullient buddhist group in front of me, energetically dancing his way down fifth avenue.

seriously, as i was sweating profusely wearing (fabulous, but black) pants that covered my entire leg, the design of his lightweight cotton wraparound pants that expose the sides of your legs (or the whole leg, given the right dance move) entranced me. of course, they were pretty much all he was wearing (except for a small pair of white terrycloth shorts, which were revealed when the pants were removed with a flourish). oddly enough, he looked “cooler” with the pants on… i didn’t get his photo, so I’ve attached a general image of the style: one piece pants that you secure around your waist with ties from each side (the pants being sewn together only at the inseam). i’ve seen this design before, usually at the tibetan/asian markets in the city, like do kham, my favorite of the lot. but the 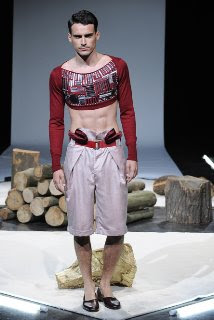 y really didn’t speak to me until i saw them “in action.”

note to self: dance as much as possible and enjoy your body, whichever kind you’ve got…

feeling bold and want to save a few bucks? here’s a free pattern to make a quick and easy pair yourself, provided by miss kreant at craftgrrl.

too hippie, crunchy, zen, genie for you? consider the ultimate couture version (in shorts) from qasimi (the new-ish and fab line from uae-native khalid al qasimi) shown at last week’s paris men’s fashion week (via our friends at fashion 156). gorgeous, but clearly trading one kind of cool for another…
Posted by black snapper design at 10:25 AM

Get this blog via email

click here to purchase items from my online store
BlackSnapperDesign.Etsy.com

apologies for the ads below, but if any of them appeal to you, do click on them and help us earn a few much needed pennies...